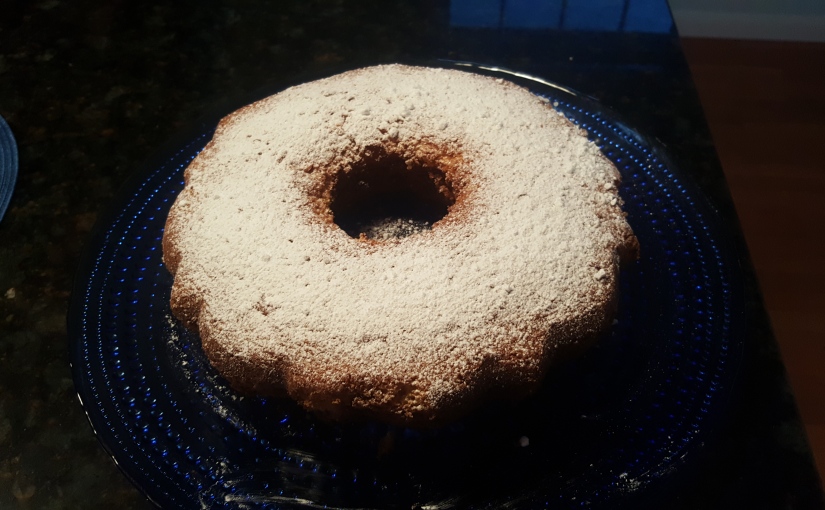 Growing up, my mother’s mother (Nana Kelly) would mark the occasion of her birthday by making a hot water sponge cake. This year, I decided to honor the tradition with an old recipe shared by my cousin Sharon, who is a pretty amazing family historian.

As I have mentioned before, I like to cook but my skills are limited. My mother and I joke that more than three ingredients puts a recipe into the “complicated” category for me. I also like to bake, but I tend to bake brownies and banana bread by following the directions on a box. I think it’s still baking if you have to add eggs. My daughter Elizabeth says that is not really baking if it’s not from scratch. Technicalities. She’s such a stickler.

This sponge cake recipe, though, did require baking from scratch. I also had to take a late-night trip to Target to buy a new bundt cake pan and a flour sifter. (Didn’t I get these as bridal shower presents? Where did they go?)

I woke up early Saturday morning to bake the cake in time for my sister Kathleen to bring to my mother on Cape Cod. (We celebrated her birthday the week before and took my mother to see Hidden Figures, which is inspiring, if you haven’t seen it yet.) Around 6:30 am, I discovered my can of baking powder had expired. I found another one hidden in the cabinet, which was also expired, back in 2014. Then a third can (I kid you not) also expired. As I said, I don’t bake in the traditional sense that much.

A quick trip to our neighborhood supermarket that opens at 7 am and the first crisis was averted. I also had to separate the egg whites from the yolks, four times, which is a queasy undertaking for me so early in the morning. But whipping egg whites into stiff peaks is great fun. I want to do that again. Meringue recipes anyone?

The cake took one hour to bake. I warned my husband and daughter not to make any loud banging noises and cause the cake to collapse. I am not sure if that really happens, or is more of something I saw watching Lucille Ball or Mary Tyler Moore, but the concern justified my decision to sit and drink coffee instead of unload the dishwasher as I waited for the timer to go off.

As soon as the masterpiece came out of the oven, I jumped into the car to drive to my sister’s house a half hour away. It smelled delicious. Later that afternoon my mother, father and sister all confirmed it tasted delicious too. I told them it wouldn’t hurt my feelings and I could handle the truth if it was really otherwise. But they insisted.

Before they took a slice, my mother sprinkled the cake with confectioners sugar and placed it upon a blue glass pedestal serving plate to improve the presentation. Have I mentioned that she makes everything look better? 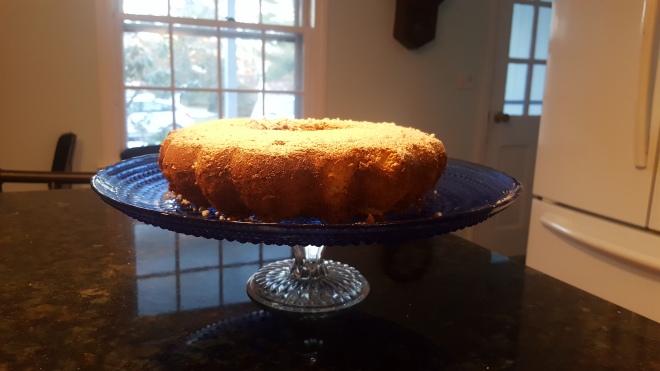 Just like she did as a little girl, my mother celebrated her birthday in church by having her throat blessed by a priest in honor of the Feast of Saint Blaise, and then enjoyed the sponge cake that her mother used to make. It was a nice re-creation of a memory for my mother, and the making of a special new one for her daughter.

Here’s a video directed by Kathleen Kelley of my mother blowing out her candles. My favorite part is watching my father struggle with the lighter and hearing my mother suggesting, subtly, under her breath that “Matches work.”